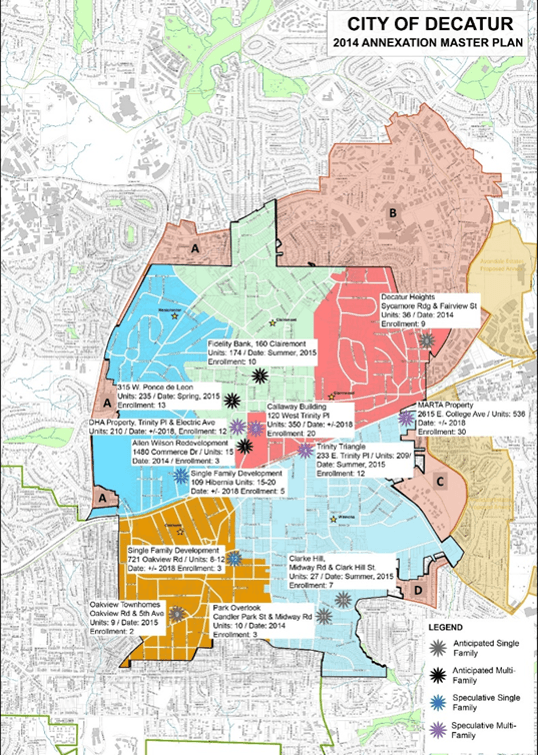 Sizemore worked with the City of Decatur Schools between 2003 and 2015. When we first worked with the Decatur System, their school population was declining. Parents preferred local private schools and the system of neighborhood schools was too expensive to operate at a high level of educational programming.

The new superintendent, Dr. Phyllis A. Edwards. Ed. D., worked with Sizemore Group to close two of the elementary schools and to completely revamp the educational program to include limited Pre-K, a project-based curriculum, site based management and a high school education which was career based and college ready. The process was rigidly data driven and empirically based on successful programs found throughout the nation. School capacity and facilities conditions were provided by Sizemore Group to give the system the data they needed to present options to the community. We also provided Demographics based on birth rate and cohort survival to allow the modeling of various school zones and grade level distributions. In the end, the system had three K-3 schools, a 4-5, Middle and high school and they started building.

Within four years the word began to circulate that the Decatur School system was becoming the best in the area. Soon the school age population began to grow. During the recession, as the population of other districts surrounding Decatur fell, Decatur grew. People were moving to Decatur to enroll in the public schools. In another four years, the closed schools were reopened, and additions were planned for the High School and the Middle School. The President visited Decatur to meet with the Superintendent to bring attention to the high quality of Decatur’s Pre-K school. In 2016, a new elementary school and a new Pre-K have been announced, and the school age population continues to grow.

This facility is the first non-profit owned Charter Career Academy in Georgia. It was designed as a LEED building to be built in eight months, from “we need a building but we don’t have a site”, to move-in with all the furniture and technology needed for a future oriented course of study. The Ninth Grade Academy (15,000 sf) was the first element of Hapeville Charter Career Academy’s High School. It was also one of the first five charter academy’s to receive a grant for construction from the State of Georgia. The Ninth Grade Academy was converted into an Eighth Grade Academy as part of a second phase of construction including a larger, 55,000 s.f. high school building.

“From the very beginning of the initial phases of the planning of the design of Hapeville Charter Career Academy project, the Sizemore Group design team has consistently demonstrated an extremely professional and focused approach which accounts for the tremendous success in the completion of the ambitious time lines which have been set. Speaking on behalf of the Hapeville Charter Foundation Board and faculty/staff, the customer service rating of the Sizemore Group design team is A+.”